In the early 1880's John White Halse farmed in the Roncombe Valley near Sidbury, diversifying into grain trading to supplement farming. Trading as JW Halse, Halse's was born. At the turn of the 19th century his son John, known as George, further developed the corn merchants' business, establishing premises at Honiton New Street and Sidmouth Railway station. Committed to the community he lived in, George was a local politician, leading Sidmouth Borough Council, serving as Devon County Councillor and running as a Liberal Parliamentary candidate three times.

George's son, John Bernard, joined the business aged 14, not long after the Great War and the Great Depression had completely changed the social fabric of farming in Britain. He devoted 70 years to the business; even during the blitz, John would take the train up to London every Monday for business.

In these difficult times, John decided to diversify into selling farm machinery and acquired Michelburghs foundry in 1942, which had an all-important farm machinery franchise. His slogan was "Everything for the farm". He sold coal, provided travelling farriers service, thatching, and he even bought and harvested whole fields of turnips.

We had been in the same location, at the bottom of Honiton High Street for 75 years, when at the start of 2017 we moved into our new state-of-the-art depot near the Daisy Mount junction on the A30.

Peter, the fourth generation of the Halse family to run the business, began to take over the reigns from his father in the 1950's. Alongside his son Philip, who took the reigns of the sales department when he was 19, they have dramatically increased trade in the last 20 years. This was boosted by the momentus decision to drop our tractor franchise to focus on farm machinery. We now have 17 mechanics, 12 service vans and 4 delivery vehicles so that we are able to sell, assemble, deliver and maintain over 50 machines a week.

The families legacy is set to coninue as the sixth generation has just joined the business. Edward joined the business in the spring of 2017, helping Philip in the office and being the sales rep for South Devon and Dartmoor. His brother George will finish school and then attend university before joining too.

Although typical of many machinery dealerships, since they were situated in the centre of market towns, we were fully aware of its restrictions. Its workshop, huge when opened in 1960, was no longer large enough to fit the biggest machines we sell. With stock overflowing from every corner, we were keen to move, but determined to wait for the right opportunity. We are very grateful to both staff and customers for their patience, and we hope you will notice an improvement! 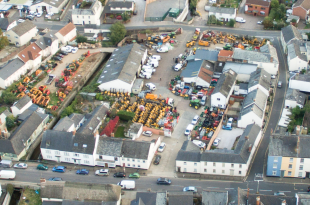